Food retailing, and the way we consume food, has changed significantly over the years, in the Channel Islands, in the UK and on the continent. For many of us, we spend less time in the kitchen preparing food than we used to - even the lettuce for your healthy salad is already washed, chopped and ready for the plate!

As our lives have got busier, it is clear that we are now conveniently choosing to shop as we go, but we are also changing what we put into our shopping trollies too.

In fact, we are moving away from ambient products, such as tins, packets, raw ingredients, to more fresh food. When I started at the Co-op, ambient goods represented about 70% of our sales, with fresh, frozen and chilled goods representing a mere 30% - now the balance is closer to 50/50.

Our current on Island warehouses cater for ambient goods, (tins, bottles and packets) with the exception of some (butters, fats and margarines) and contrary to many people's understanding, there are no chilled or frozen goods stored in our local depots.

With our proposal to change supply chain for UK sourced goods, we will be able to have back up and protection for our food business, and Channel Islanders alike, in the event of a disaster.

A Single Point of Failure?

The importance of supply chains was brought to our attention in the Channel Islands last year, when we lost production at the Guernsey Dairy and were unable to produce our own milk. This incident highlights the risk of having a ‘single point of failure’ within a supply chain. 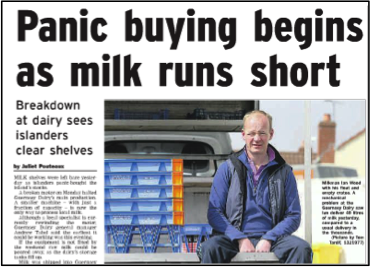 As a Society, we have similar single points of risk, having just one ambient warehouse on each Island. If the unthinkable were to happen and we lost one of these for an extended period of time (for example as a result of fire, flood or structural damage), we have very limited capability in place today to supply both islands stores from one of our warehouses.

An example of current inefficiency

In an increasingly competitive food manufacturing and distribution market, our suppliers continue to look to optimise all aspects of their supply chains. For ambient goods, this often requires us to order full vehicle loads from the UK, which are well suited to a distribution centre (supplying several hundred stores) but prove to be problematic, and costly, to our own on island operation.

• Mars Petcare, which supplies Pedigree and Whiskas pet food, require us to order the equivalent of 60,000 tins of pet food as a minimum order

• Heinz requires us to order the equivalent of 70,000 tins of soup as a minimum order.

The scale of our own operation simply can never be as efficient as the large scale UK based operations.

This compares to our own CICS distribution network servicing 10 stores from Guernsey and 13 from Jersey.

CRTG Supply Chain service also delivers to stores at every corner of the British Isles.

91 stores currently use sea transportation to get products on their shelves.

In many of these islands, the local co-op is the only store. 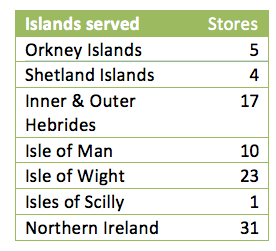 We are carrying the current risk of two ‘single points of failure’ within our existing supply chain, which we intend to remove by becoming part of a much more resilient network.

Many islanders have asked about what would happen if we had a period of extended disruption to sailings. I think to answer that question we have to make the assumption that food security from this perspective is the responsibility of the Society. In reality of course it is not, but we do feel a deep responsibility to our communities.

If there was an issue, then we of course have Condor’s own business continuity plans. These have been executed recently and were effective in locating an alternative vessel when theirs was damaged.

Then you have the LO-LO (Lift On – Lift Off) service from CI Lines (ex Huelin Renouf). Whilst this boat takes longer to get here, it always sails, and by berthing at Southampton, it provides further resilience against Portsmouth, as the main freight terminal for our islands.

Finally, if we have three days of no sailings, we are comforted that we do have airfreight built in to the contract that we would sign. This comes at no additional cost to our Society as CRTG maintains this service on behalf of all the stores in their Supply Chain service network.

East Midlands was selected as the optimum departure point for the quickest arrival time. Orders were transported via UK road haulage from Lea Green depot to East Midlands. A Hercules plane, with its ‘Head Up Guidance System’, ensured that stock arrived in the Isle of Man later that day.

Food sovereignty and security are issues that can be discussed from virtually any angle. ‘Self-sufficiency’ may be a pipe dream for many island communities and despite our best efforts to encourage local food production, the reality is that our islands could never grow or rear enough food to meet our needs.

As I have discussed in other blogs, the benefits of our intention to change our food supply chain are numerous and compelling. And we will be joining a much more resilient network of distribution centres in the process.

But your Board and management have taken the issue of contingency seriously. We feel deeply responsible to our islands and firmly believe we have secured the best overall package for our members.