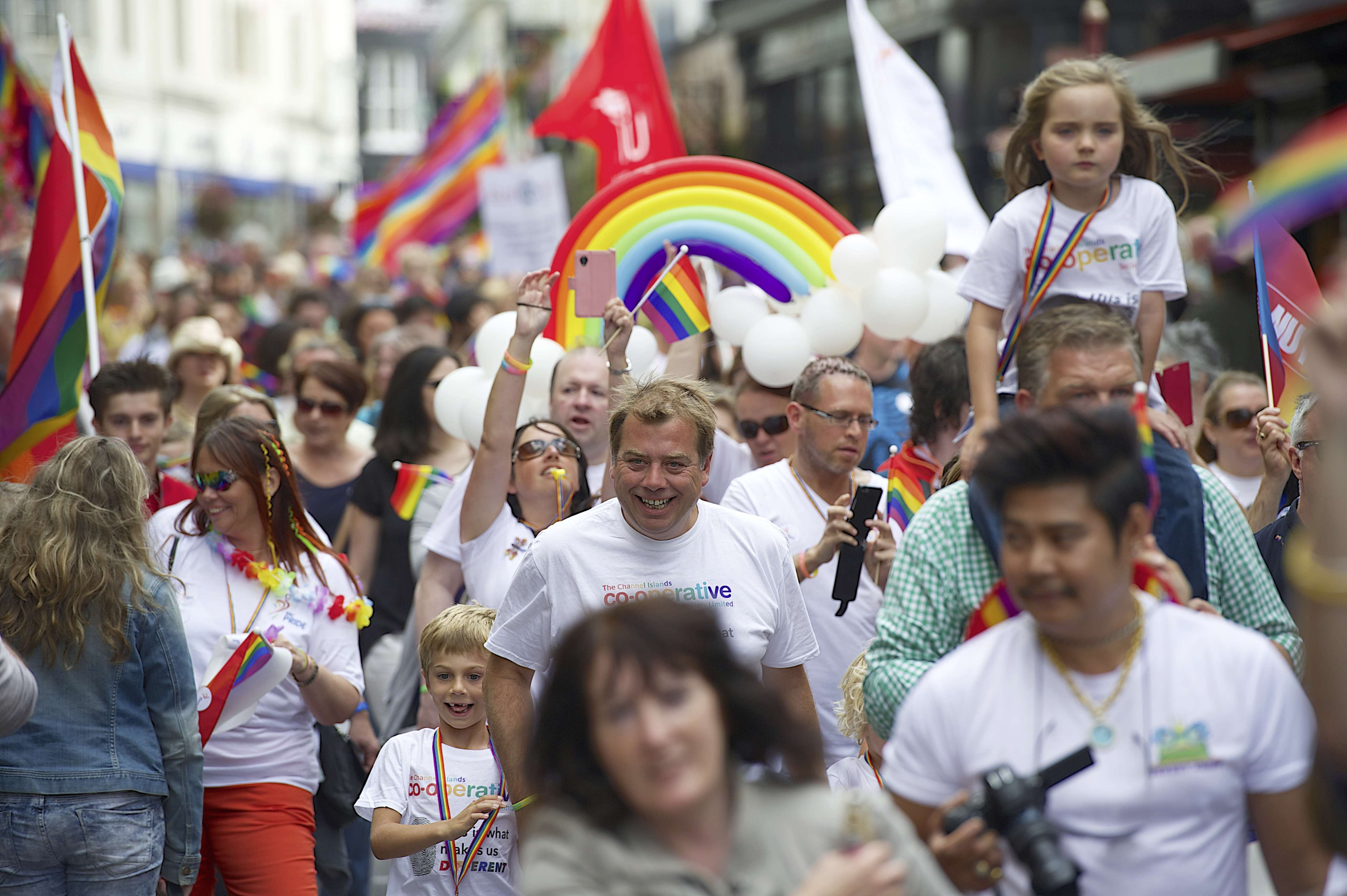 One of the greatest things about being part of a successful business at the heart of the community is being able to use our success to make society a better place. This is why we are supporting Pride, an event that champions diversity, acceptance, inclusion and the right to be ourselves. I recently spoke to Lucy Stephenson from the JEP to explain the story behind our ongoing involvement with Pride. I've received such lovely feedback since the article went out last week. So, with our third Pride just around the corner, I wanted to share it here too. Article as appeared in the JEP Equality and Diversity supplement on Saturday 3rd September:

THREE seconds is all it took Colin Macleod to throw the Co-op’s weight behind Jersey’s first Pride event. It was 2015 and as chief executive he had been asked to sponsor the event, and only briefly did it worry him that not everyone may support the decision for a business owned by its members to back a celebration of diversity organised by the lesbian, gay, bisexual, transgender and questioning community.

‘For about three seconds that worried me, but then I gave the emphatic support we have lived up to ever since,’ he said. ‘After all, Pride champions the most fundamental of all our rights; the right to be ourselves.’

‘We don’t consider ourselves sponsors in the traditional sense, I think friends of Liberate [which organises Pride] would be a better description.’

Not everyone did initially support the decision, of course, and as well as some members of the Society there were also some colleagues that Mr Macleod had to explain his thinking to.

But the overwhelming majority of feedback was positive, and this year the Channel Islands Cooperative Society is sponsoring its third Pride. 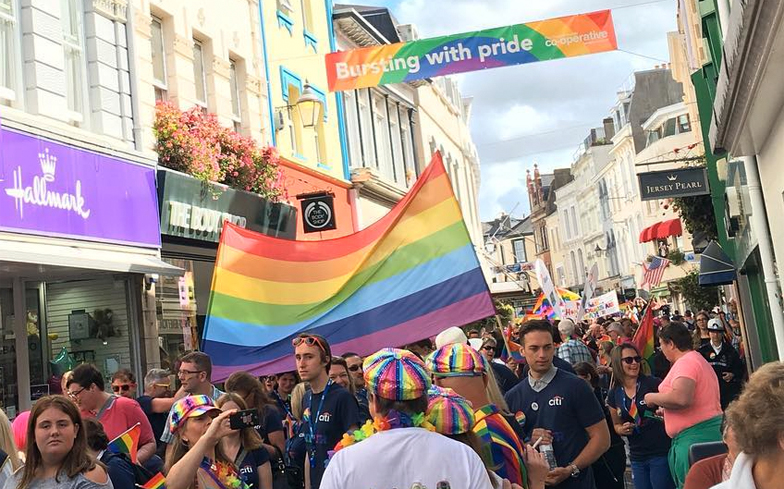 Scenes in St Helier last year, with our banner draped across the main route

‘I am proud that I think our involvement has helped to give Liberate a power that has surprised them,’ he said.

The business is committed to working towards becoming one of the first organisations to gain the quality mark, which recognises companies that place diversity, inclusion, fairness, equality, respect and acceptance at the heart of what they do.

After all the Co-op’s sponsorship has sparked conversations at the organisation that otherwise would probably not have occurred.

‘Our sponsorship has helped us have conversations with colleagues about what inclusion means, what being part of this community means, and these are important conversations which otherwise we probably wouldn’t have had,’ he said.

Father-of-two Mr Macleod, who describes his leadership style as a ‘mixture of caring and daring’, says that fundamentally business is about people.

And naturally people are a pretty diverse bunch.

‘No one was born hating people on the basis of their skin colour, sexual orientation or their religion and I want my children to grow up in an inclusive community. One that is accepting,’ he said.

‘I don’t think I was ever not pro diversity and equality but I think being a parent has solidified my views that we have an duty to be kind, particularly now when there is so much hate in the world.’

And when he says ‘we’ Mr Macleod doesn’t just mean people generally, he means businesses too.

'Business can be a force for good in society,’ he said.

'From our perspective  [at the Co-op] it is important to make money but it is also important what we do with that money – we have a responsibility to make society a little bit better as a result of our business existing. And in our case as a purpose for the business existing.

Our Store Support Centre in Jersey a few days ago. All dressed up and ready for Pride

‘It is about putting kindness back in business.’

It is that thinking that means the Co-op now refers to its diversity policies, which affect many areas of the business from HR and payroll to recruitment and customer services, as ‘kindness’ ones.

‘A kindness policy is something you want to pull off the shelf and read,’ he said.

‘If we look at diversity and equality in isolation they are not necessarily words that encourage people to grab the policy off the shelf and devour it, but both come back to ensuring kindness in business.

‘We have got people with every characteristic you can imagine [working at the Co-op] from age, sexual preference, race, religious belief, everything. There are those who follow different religions and those who follow none at all, and there are, as you would expect, those who supported that initial decision to sponsor Pride without question and those who required a bit more time and explanation.

And as an organisation that is owned by and run for the benefit of the community we see it as fundamental to our purpose that we employ a workforce that reflects that community.

‘And I think that is particularly true when you see the rise of hatred in the world.’

It is clear that the Co-op has not only helped Liberate and Pride more generally over the last three years, the relationship has worked the other way too.

Today the business, and the man leading it, are something of a champion for diversity and equality, in all sorts of guises and whether it is called kindness or otherwise.

The Co-op is run by a majority female board who interesting were chosen by the society members, has 57 per cent female staff but only five of its senior leadership is female – something Mr Macleod says he is working to address, albeit while trying to maintain the delicate balance of not suffocating the potential of any employee.

‘The benefits of equality and diversity are numerous and obvious,’ he says. ‘I really can’t understand why, on the whole, there remains a standoffish attitude from many businesses to this. Whilst there does, I believe there are victims at both ends of the gun.’

But today Mr Macleod has a simple message for everyone ahead of this year’s Pride, and it is one that he says applies in business just as much as it does in everyday life: ‘It is about more than tolerating, because at the end of the day who wants to just be tolerated?’

‘Actually it is about welcoming and being kind to the people around us.’ 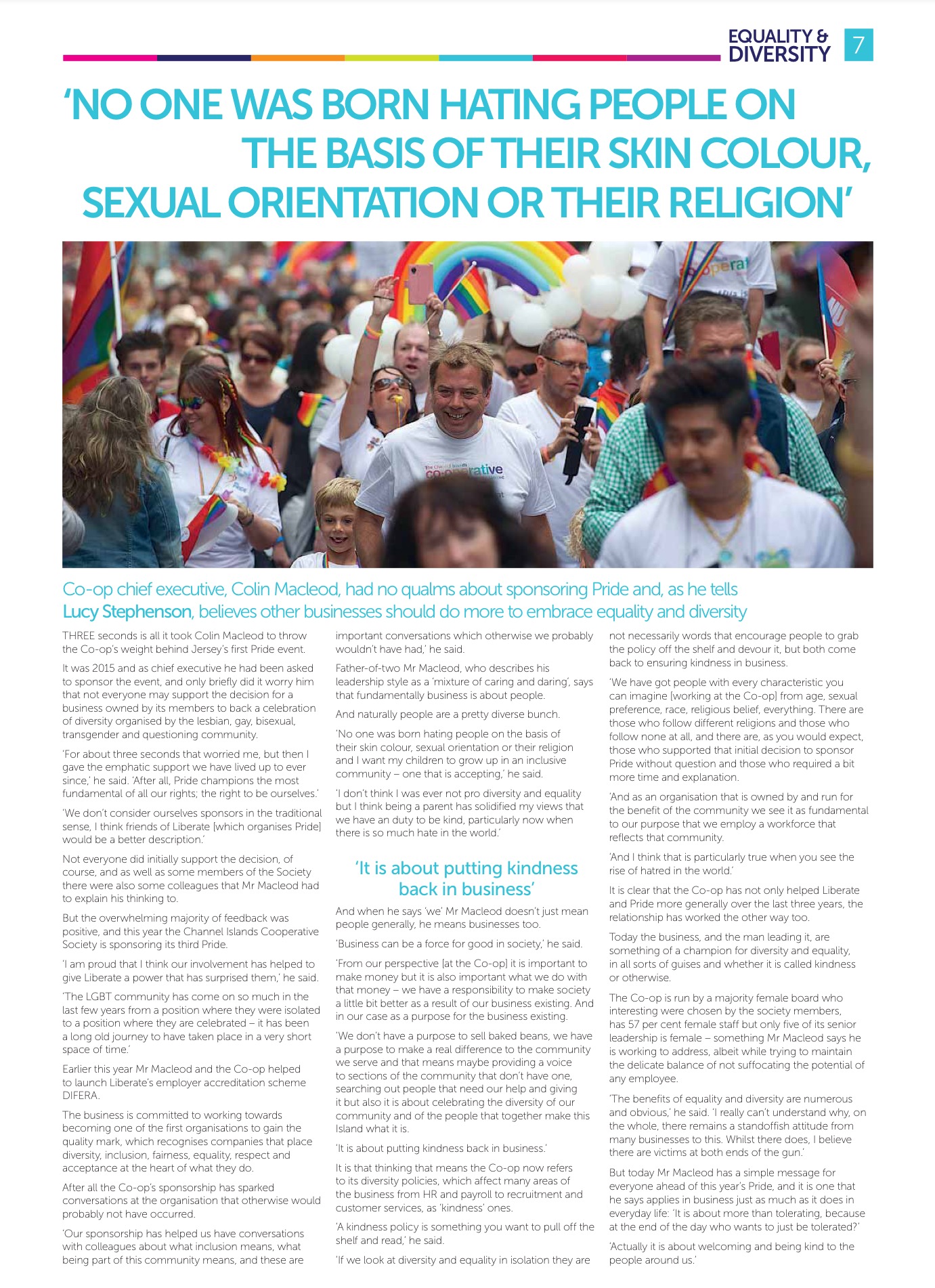