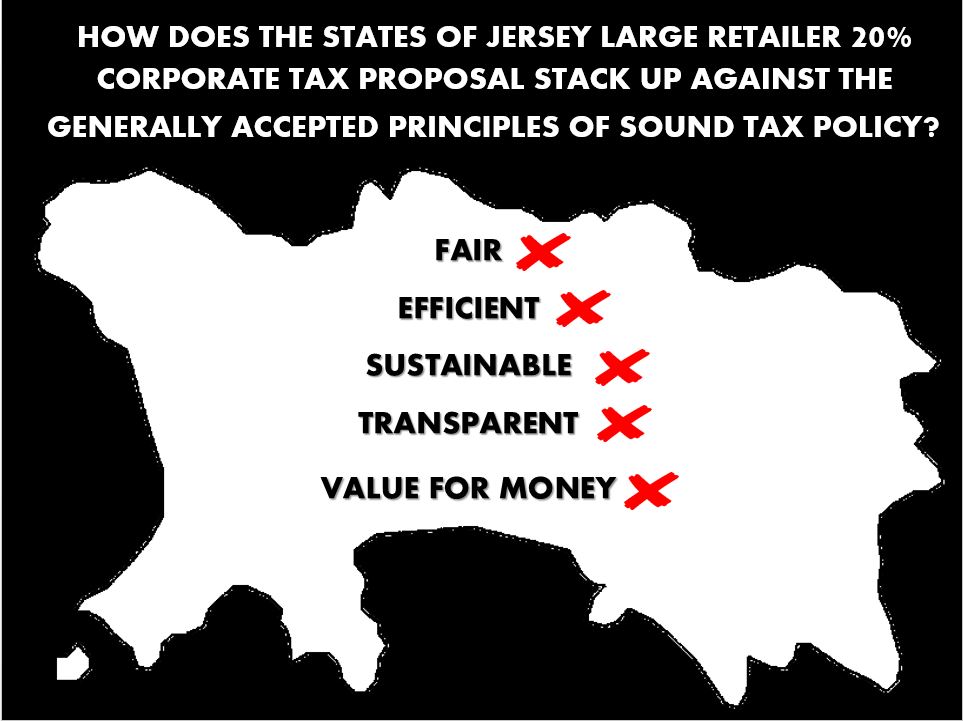 I find it difficult to understand why our Government is so anti local retail, and so in love with Amazon.

“Big retailers may have to pay 20% tax.” To the average voter on the street, this sounds like a good thing, right? But who ultimately pays?

A good tax policy should be about what’s best for the Island, not what makes flattering headlines.
In truth, the proposed 20% tax on “large corporate retailers” doesn’t meet any of the criteria of a sound tax policy and certainly won’t achieve its goals.

So, what makes a sound tax policy? There is a broad consensus amongst economists that tax policy should be fair, efficient, sustainable, transparent, and offer value for money. Let’s look at how the proposed 20% tax measures up.

In terms of whether it considers the ability to pay and minimise the opportunities for avoidance and evasion, no.

Inexplicably punished by a government that prefers online to local, retail is struggling. Footfall in St Helier’s shopping area dropped by 2.2% in 2017, retail employment has fallen and its Gross Value Added has fallen by 3% in the last four years. The weakest performing sector in our economy. People use the internet because it is cheap (they can avoid GST), accessible, and convenient. But, rather than acknowledge this obvious and simple fact the Government has responded by making St Helier inaccessible through anti-car and anti-shopper policies.

Retail operates on margins that are wafer thin. When GST was first introduced, retailers said that any additional Government charges would be passed on to the consumer. They were. And the same will be true with the 20% tax. In an environment of rising costs and fragile consumer confidence, the last thing retailers want to do is add extra upward pressure on the prices customers pay. But this doesn’t appear to concern our Treasury Minister.

UK-based retailers will obviously take steps to legitimately avoid this tax. UK corporation tax is 19% and may drop to 15% in a few years’ time. They will simply book profits in the UK instead of Jersey.  Now we are left a tax that only punishes local retailers. Again.

Most people believe there is structural inefficiency in the way we are governed. So, we have inefficiency exploiting efficiency.  Because it can. Retailers think long and hard before we increase prices always seeking to protect the value we offer customers by controlling costs very tightly. It’s a shame our Government doesn’t.

Why not keep public spending under control? Why give £100,000 of taxpayers’ money to a retail body that duplicates the work of the Chamber of Commerce? If the Minister really does need to balance the books, he could look to get rid off the De Minimis level and receive the tax that should be due on the huge amount of imports coming into Jersey. Or is it easier to not do what we should do, given that it is election year?

Does it minimise the economic cost on society and markets, and does it provide the right incentives for growth? No.

Tax policy shouldn’t create ‘winners and losers’ by targeting one sector of the economy and not the others.  In addition to driving inflation, this tax will lead to less investment in King Street, local shops and local jobs. In challenging times, we should be helping businesses to grow and innovate, not making it harder.

Is the 20% tax Sustainable?

This retail tax is not responsive to long term trends. In the past, we all shopped on the local high street or in the supermarket. But the retail industry has changed. Today, international online retailers are flooding Jersey with goods. They don’t pay any tax at the point of import or export. And they certainly won’t be paying this tax. The 20% tax does nothing to address this. Except widen the structural unfairness that already exists. Punishing local retail. Amazon and the rest must be laughing at us.

A GST import threshold of zero, resulting in a 5% charge on goods bought online would generate significant tax revenue and help, not hurt our high street by levelling the playing field. It would also be cheaper than consumption taxes that exist in many other places. It might even motivate the States to simplify the collection system. Given that we are supposed to be ‘digital Jersey’, this should be easy. New Zealand, for example, have a system whereby online retailers collect the tax and pay it to their Treasury. If you want to sell to New Zealand consumers you need to play by the rules.

If that is simply too unpopular then fairness dictates that all local purchases under £240 should be exempt from GST. But government wouldn’t want to do that either. But, you have to do one or the other.

Or you continue to bleed local retail and promote online.

Is the 20% tax Transparent?

No, This policy seems to have been developed in complete isolation. There has been no consultation whatsoever with the retail industry. Co-ordination within the States also seems to be lacking. The Economic Development Department is developing the Jersey Retail Strategy now with both hands tied behind its back.

Does the 20% tax offer Value for Money?

I asked a couple of local tax experts for their opinion. They believe that the whole tax system is broken and urgently needs reviewing. Charges are piling up. The liquid waste charge (tax), long-term care charge (tax), community infrastructure levy (tax), and zero/ten are creating an ever-increasing burden on businesses and Government administration. The 20% Retail Tax will only add to this. It is not cost-effective and does not minimise the costs of compliance and collection. Whereas GST is a simple tax. The user pays based on consumption and it is collected by the business.

So the proposal spectacularly fails on all five of the basic principles of tax policy. That’s pretty impressive, right? 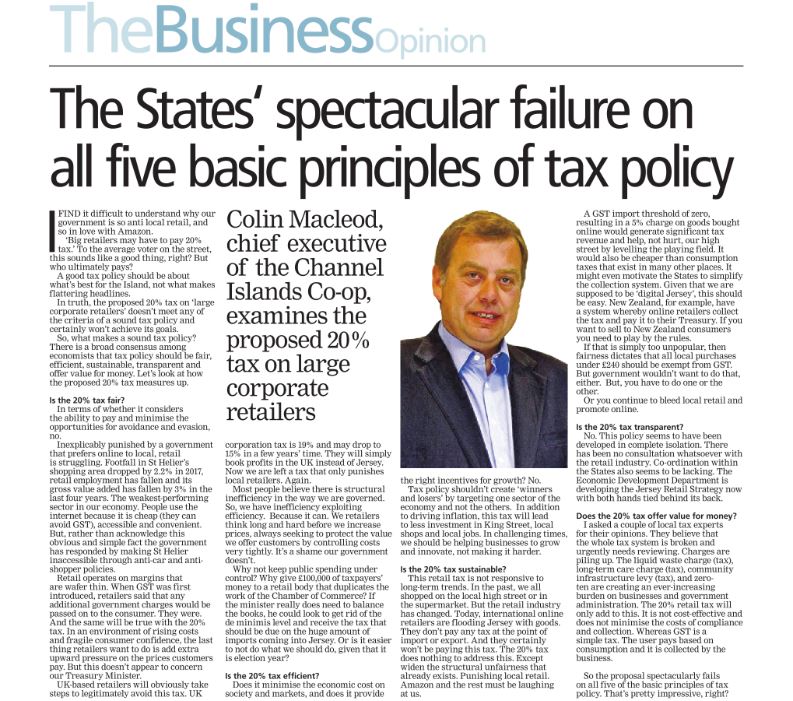 Unlike many normal businesses, we use our success as a business to pursue our purpose, “to make a real difference to the communities we serve.” And we don’t just talk the talk, we walk the walk too! So, I am absolutely thrilled that

Stressful, bright, busy and loud. These are all words that can be used to describe the world we live in. Now, imagine how overwhelming the shopping experience in today’s hectic world can be for a person living on the autism spectrum. Autism is