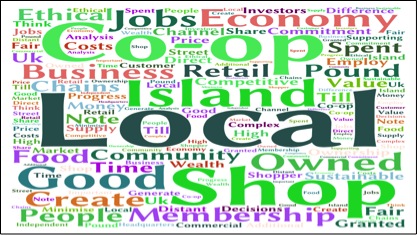 Like me, if you have grown up in the Channel Islands, you might take it for granted that one of your favourite retail chains is locally owned. Most retailers in parts of France or the UK are owned through complex, distant chains that want any economic value they create in local areas back out. We have a similar thing here with big chains extracting wealth out of our islands.

The Channel Islands Co-operative is special because it is locally owned. People might think that we are important because we create local jobs, but of course all shops have to be staffed by people that live locally. It is the ownership that really makes the difference to our islands.

Why? One way to answer that is to ask what happens when a pound note is spent in one of our food stores. OK, it hits the till. What next? For other retail chains, the aim is to minimise local costs so that as much of that shopper’s pound can return to ‘headquarters’ and investors abroad, but not for your co-op. We are locally owned, with a commitment to local supply of products and services, the pound note flows through our local economies, creating wealth and supporting jobs at every turn.

One independent economic analysis studying the impact of money spent with Lincolnshire Co-operative, suggested that a pound note spent in one of their shops circulated five times before the final penny left the local area, and because we are surrounded by sea and pay taxes locally, I think for us that would be even higher.

Money spent in a local shop is ‘sticky’ money. It stays local, because we employ local people, are owned by local people and can source products and services from local businesses that do the same. We return dividend to local people too and that money starts back at the beginning of the cycle.

Albeit from the other side of the ‘pond’, these illustrate the point quite well.

On conservative estimates, using internationally accepted benchmarks, local shops like ours, generate an additional £4 for our local economy, for every £10 spent by a customer or member.

That means that we create far more jobs indirectly on the islands, by being a successful, competitive co-operative retailer. However, if we lose market share by keeping inefficient direct jobs going, then the value we generate will wither and our local benefit will decline as sales go down. And not just for us but our suppliers too. You probably know where this story ends and suffice to say it is not good.

On Radio 4's Desert Island Discs, Terry Leahy, ex Tesco chief, argued that the closure of local shops across the UK represented ‘progress’. Well, it's good for Tesco's investors, who have had a hard time recently, but it is not good for local communities.

Local shops are the bedrock of local community and the local economy, but we have to be as commercial and more in our decisions to sustain that value, so shop local and don’t take us for granted. After all, it is good for us all.